I’m an Army brat, born in Ft. Mead, MD, USA.  My dad, Col. Thompson R. Mulkey, got drafted around 1944 and, after some initial misgivings, realized a career in military intelligence meant never having to buck hay in Spokane, Washington ever again.  If you don’t know what bucking hay is, you’re lucky.  If you do, you’re probably in pretty good shape. 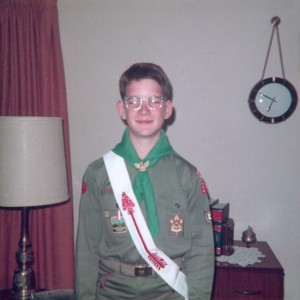 Order of the Arrow member and future satisfied LASIK customer.

Shortly after graduating OCS, Uncle Sam treated Dad to paid vacations in Germany and Korea, both garden spots he’d never have gotten to see if he’d stayed home on the farm.  After family leave in Tokyo, Dad sailed for home with his little brood.  Somewhere on that long ocean voyage, the seed was sown that soon became your humble correspondent.

Despite knocking around my first 15 years in places like Ft. Holabird, MD and Ft. Richardson, AK, I didn’t follow in Dad’s footsteps.  My paramilitary training formally ended when I attained the rank of Eagle Scout the week Dad retired.

We collected Dad’s Legion of Merit citation, my mom’s pug dog Tuffy, piled into the station wagon and embarked on our last great “World Relatives Tour.”  Down the Al-Can highway (1500 miles of dirt – do not attempt in your Miata), on to Seattle, Spokane and Baltimore.  Did I mention my folks liked to drive?  Along the way, hippies passed us by on their way to Woodstock.  Did I sense that I was missing something?  Oh, yes.  Did I make up for lost time the second we hit the Lower Sonoran Desert settlement of Phoenix, AZ?  Oh, yes. 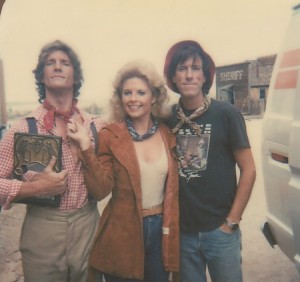 "We can almost see LA from here." On the set of my first film, the zombie/western classic "NATAS: The Reflection." Later featured on Elvira Thriller Video. Only for the brave.

Cut to:  2011.  What a long, strange trip it’s been.  The Al-Can looks like a walk to 7-11 by comparison.  You can see parts of the journey chronicled herein; the acting part, anyway.  You may notice in the Video section that I’ve played more than my share of “Guys in Uniform.”  Somewhere, The Colonel is laughing.  Well, all I can say is, it beats bucking hay. 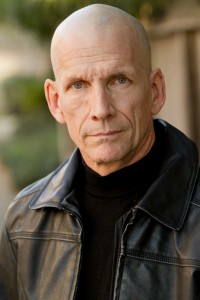 Telly Savalas called: he wants his hair back. The look for my current gig.